With India’s 16th national election under way, some parties appear to have an edge as technology, social media and big data play a key role in connecting with voters.

“The era of big data in Indian politics has arrived,” said J Ramachandra, CEO of Gramener, a data analytics startup that is working with media companies to digest the huge chunks of election information to provide voters with user-friendly maps of the state of play.

At the opposition Bharatiya Janata Party’s (BJP) election backroom in New Delhi, a team of over 100 young techies and consultants have propelled prime ministerial candidate Narendra Modi to the lead position. 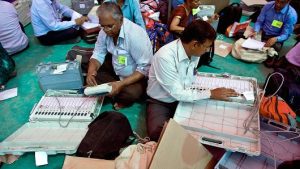 Through data analysis they have helped raise funds, rework advertisements and create detailed models for voter engagement in swing states as well as gender and minority voter clusters to increase the power of their micro-targeted strategy.
The result: a data-driven election campaign not very different from that of U.S. President Obama’s, albeit somewhat smaller in size, scale and perhaps style.

“We have developed our own customized digital tools based on both commissioned and open source data that puts us in direct touch with voters,” said Arvind Gupta, the BJP master strategist behind Modi’s 3.67 million followers on Twitter, 12 million likes on Facebook and the party’s 68 million page views on Google Plus.
Read MoreMeet the man tipped as India’s next leader
Modi’s unique digital events like ‘Chai pe Charcha’ (Talk over tea) are unprecedented election events that put the political leader directly in touch with people at tea stalls in villages at publicized localities through a combination of satellite, DTH, internet and mobile.
“Modi is perhaps one of the most tech-savvy politicians in the world and certainly the most active in India,” says Amit Sheth, a professor at Wright State University’s Knowledge Computing Center in Ohio.

Sheth, with the help of his students, is mining real-time data on the ongoing elections, which include voter sentiment, emotions and concerns in different constituencies and states. India’s political parties then use this data to drive donations, enroll volunteers, and organize resources on the ground to improve the effectiveness of everything from door knocks and phone calls, to micro-messaging and social media.
Technology and data analysis have come to play a crucial role in this election which will use over 930,000 polling booths and 1.7 million voting machines, with 11 million personnel participating. Power of big data and psychographics in Electoral process

ShareIn a presentation at the 2016 Concordia Summit, Mr. Alexander Nix discusses the power of big data in global elections. Cambridge Analytica’s revolutionary approach to audience targeting, data modeling, and psychographic profiling has made them Read more…